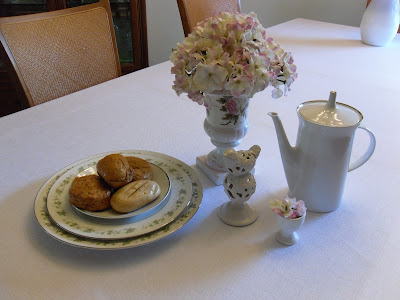 Hope you are having a good week,
thus far!

Mine had been really good up until Monday evening,
more about that later.  Had a great weekend,  we got to
watch Brooklyn a lil on Sat.,  then Dee and Jerry came
over to help rearrange our bedroom, Megan came back
to get the baby, as Scott was on his way home from
Miami after flying in from his trip to Spain, which is
another 4 hrs., so we all had dinner together,  then the
furniture moving commenced.  I really thought the room
would be a wreck once we got it all moved where we
wanted it,  but  much to my surprise Dee and I got
busy decorating and pretty much had it all done by
11:00  that night.  Still working on a few things, but
it looks great already.  Will show yall some pics
probably next week.

Was amazed at how confident my daughter has
gotten with hanging stuff and painting  since she has
been a home owner for over a year now. She did a lot
of it for me, and I can remember when she used to
be intimidated to even hang a picture. We also did
a lil touch up painting on my walls, and she is good
with that too, since she just finished painting here
kitchen cabinets.  It was really fun working together
and it was great to get it together so quickly.

Sunday was our usual and very restful and
relaxing,  we can never get accused of working
too hard on Sunday.  lol 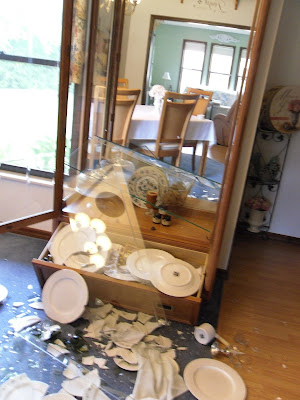 I had the doors open and the drawer because
I had taken some stuff out of there,  but then
I was just standing there looking to see if there
was anything else I wanted to get,  not touching
anything mind you, and all of a sudden the
shelves just imploded. 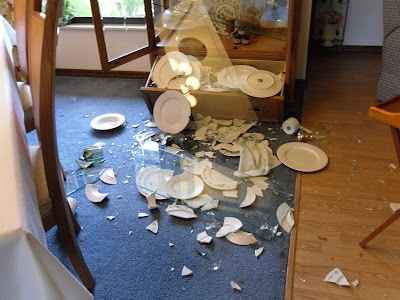 Absolutely, scared the life out of me.  All I remember is
standing there and my mind couldn't grasp what was
happening,  I don't even remember moving back but I
had to of because of where that glass shelf is.....cause
initially I was standing right in front of that open drawer.
I looked down cause my toe hurt, guess something
fell on it,  then realized I was bleeding on that leg,
so went to wipe that off and realized the other was
bleeding too,  but they were just tiny cuts from chards
of glass.  See where that shelf is laying (in pic above)
my feet were right behind that, cause I remember
seeing debri around my feet when I looked down. 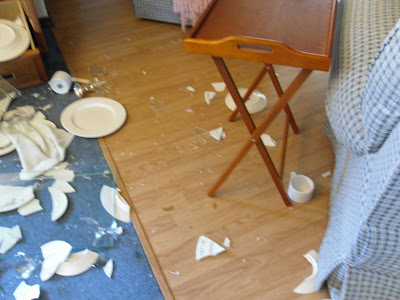 The sound was incredibly scary, like a bomb went off.
Glass and china everywhere, in the dining and family
room. Have to say I think I was in shock,  I just stood
there looking at it ....Then I wanted to cry,  my wedding
china and crystal were demolished and a few other
prized pieces, that belonged to my late grandmother
and neighbor, but then the thought came to me,
"it is just stuff,  you can't take it with you!", I believe
that was the Lord talking to me, as it just took the
sting out of it and then thank the Lord I only had tiny
cuts........it is like my hubby said if I had been getting
something out of there, I might have gotten a really
bad cut on my hand or arm, and really when I look at
all this mess in pics,  I think it is a miracle I didn't have
any gashes on my feet or legs.  So God was very
good to me......................... 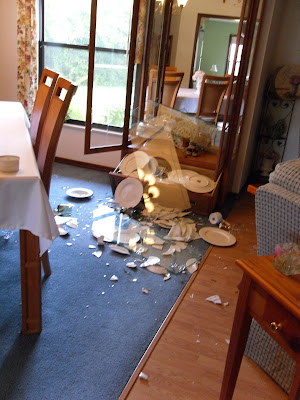 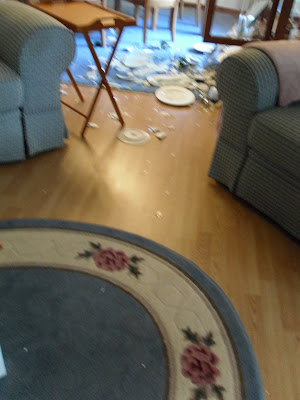 This was from the family room side,
do you see all the glass chards everywhere. 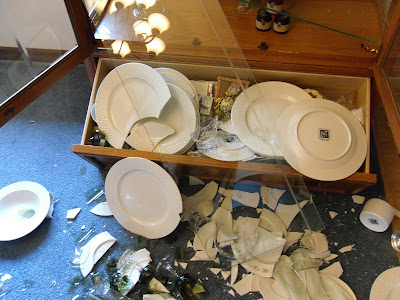 It is a miracle that anything survived............lost all my
crystal,  but still have 5 of my china plates, fortunately,
most of it was in the other hutch.
It took over an hour for my heart to settle down,  it
shook me up so............and took a long while to clean
up,  called hubby and he left a lil early,  so didn't do
anything till he got here,  as I needed to think about
a plan of attack.  So we got out the good and trusty
shop vac, and brought in our large garbage can
and worked our way froms the outside area inward
picking up large pcs. first and then vacumming
the lil pcs.  Took quite awhile, we were exhausted
afterwards. Am very thankful our refuse collector,
have an automatic lifter that empties those waste
cans so thankfully, they want have to touch it.

Our cabinet got a lil gouged on the top of the drawer
and the bar underneath that the drawer goes on
was broken,  but hubby was able to fix it.  We were
able to use a grease type pencil in oak color that
my cabinet man left us years ago,  and it really
covered the scratches and few gouges we did
have.  so all in all it looks pretty good,  now have
to get some new shelves made, but thankfully,
I have one left to take for them to use as a model
for the others.  We were really grateful too,  that
none of the other glass was broken or the mirror
that is in the back of the hutch.  Did have a lil
scratch in the glass on one side,  but it isn't bad.
So all in all,  we faired pretty well considering what
that looks like...............don't you agree???  lol

Well, hope you have a good rest of the week,
I will sure be working on that one too!

Oh Nellie your weekend started out so good too. Thank goodness you were not injured in anyway. I'm so sorry to hear about your wedding china, crystal and pieces that belonged to your grandmother. I don't know if I could be as up beat as you are. It is just stuff and you still have the wonderful memories. Wishing you peace and quiet for the rest of the week.

I am so thankful that you were not hurt. I am also glad that you have accepted the loss. It is so hard when things like this happen. But there was nothing you could do to bring it back. Let your memories warm your heart.

What a shock. Bless your heart!

Oh, my heavens! I'm so glad that you weren't seriously hurt! So strange how it just happened. But I agree with how you are looking at it. It's just stuff. The memories of your grandmother's pieces will never be taken away from you nor the memory of getting ready for your marriage and all the details it encompassed. What a gem of a husband to come home early and help you out.. to lend a supportive shoulder to lean on. So sorry for that scary experience!

Oh, Nellie! After seeing your first hutch picture, I just sat in shock with my hands over my mouth in unbelief! I'm still in shock. I write a few words then just sit again in disbelief! I praise the LORD that you are okay. I thank the LORD too, that the hutch did not fall over on you! You said the shelves imploded. Could it have been the plastic pieces that the glass sits on wore out through the years and became weak? It makes me think I need to check those in my hutch. I'm so sorry about your wedding dishes. Is that pattern still available? If so can I contribute to help you replace them? I hope your green stem glasses were not part of those that got broken! I'm so sorry.
Love to you, Susan

Nellie,
Wow how scary this must have been. So happy to hear you are ok. That looks like it could have been much worse for you so thankful it was not. Sorry about all your crystal and China. Even though you have a good outlook on this I know it is hard to see your pretty things in a pile like that. Glad you were not seriously hurt.
Kris

Oh my!
Truly our GOD was a "shield about you." So sorry for the treasures that broke but rejoicing that you weren't badly hurt. And yes, Jim is certainly a Gem of a husband!
((HUGS))

I'm so glad you didn't get hurt too bad. That could have been very bad if those shelves had landed on you. I'm so glad your angels were watching over you and shielding you. God is good!
hugs♥,
Caroline