Why we should fly the American Flag!!! 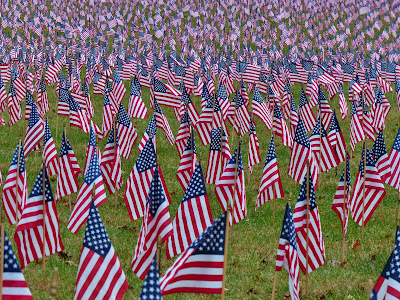 Hope this finds you doing well.

Know it's not a patriotic holiday
or anything but
I am feeling very inspired today
since we just got back from a very
restful and special time with our
daughter, hubby and furry grand-
son dog.

This might seem a bit of a strange
post but I just feel so inspired to write
it down and thought yall might glean
some encouragement from it as well.
So hope you will continue on.....

On our trip home from Charleston,
once we got into Florida I started
noticing American Flags all along
I-95, Most were huge flags
waving in the breeze, and looking
so beautiful even against the back
drop of a gloomy overcast day.

With each flag I saw, my heart
began to be encouraged, excited
and emotional, and I began to
wonder why it was having such
an impact on me at this moment,
not that it doesn't always make
my heart swell with patriotism
but this was way above the norm
so I began to ponder that wonder.

I realized that for me...
Our American Flag is such a
symbol of Love for God and
Country and the American way
of life, and religious freedom along
with so many others freedoms that
I have always known, loved and
enjoyed my whole entire 67 yrs.
of  life.

Seeing all those many flags waving
so grandly in the breeze made me feel
a sense of all is right with our country
and that there are so many people
who love America and the American
People and the American way of life
just like I do.....
or there would not be so many flags
out there in the midst of this
anti-American narrative that is going
on these days.
Sadly I think some people have become
afraid to even have a flag on their house
or in their yard. Seeing all those flags
made me realize we need to fly our flags
proudly every day, as they might
just be the encouragement to some
one else, that it was to me.

Then this morning I was reading
in a lil book that a friend gave my
hubby years back, called
"God Bless America, Prayers and
reflections for our Country."
I read a page or 2 every day, and
guess what my reading was
for today???

"The Star-Spangled Banner"
It shared the words of the song,
but also tells about how it came to
be written.
You might have heard the story,
but I am sure there might be some
who haven't heard it, so read on.

During the war of 1812, the British
captured the city of Washington,
setting fire to the Capitol bldg. and
the White House.
In the blaze of cannon fire, Francis
Scott Key, a lawyer living in George-
town, could still see the flag waving
over Fort McHenry.  When the bomb-
ing suddenly stopped during that night,
he had no way of knowing if the flag
was still there or if the American strong-
hold had fallen to the British....
but at dawn the American flag became
visible, still intact over the fort.
Key was inspired to write a poem.
His brother-in-law took it to a printer
and copies were circulated around
the city.  "The Star Spangled Banner"
was adopted as our national anthem
on March 3, 1931.

Oh, say can you see, by the dawn's
early light, what so proudly we hailed
at the twilight's last gleaming,
whose broad stripes and bright stars
through the perilous fight, O'er the
ramparts we watched were so gallantly
streaming, and the rockets red glare,
the bombs bursting in air, gave proof
thro' the night that our flag was still
there.
Oh, say, does that star-spangled banner
yet wave
O'er the land of the free and the home
of the brave!

Oh, thus be it ever when freeman shall
stand between their loved homes and
the war's desolation;
Blest with victory and peace, may the
heaven-rescued
Praise the power that hath made and
preserved us as a nation!
Then conquer we must, when our cause
it is just and this be our motto:
"In god is our trust!"
and the star-spangled banner in triumph
doth wave,
O'er the land of the free and the home
of the brave!

Some people would say oh, this is all
just a coincidence,  but I don't believe
that, I think it was an encouragement
from the Lord.
Hope this brought some encourage-
ment to your heart today, as this
whole experience did to mine.

Just now it came to me that flying the
American Flag was like a hidden symbol
to every other Proud American that loves
our country that.....
Hey, I am not alone in this battle. It is
sort of like when the early Christians
used the Ichthus or fish symbol to
encourage one another.

So have a great day and encourage
others today by putting your flag out
and if you don't have one....get one
and fly it proudly.
It really is important, and don't forget
just one person can make a difference.

I always love seeing our American flag waving in the wind. People died so we can fly that flag over a free land. Many people today are not free around the world. We have much to be thankful for.

Thank you Kris,
and thanks for commenting
Have a great weekend,
Blessings,
Nellie

Hi Linda,
You are so right....we do have much to be thankful for and many are not so blessed.
As well as so many have paid with their lives for us to have the freedom that our
wonderful flag symbolizes.
Thanks so much for stopping and leaving your encouraging comments, it is very appreciated.

Have a Blessed weekend,
Nellie

I'm glad all those flags brought you some comfort Nellie. It's very patriotic.
Thank you for sharing on Create, Bake, Grow & Gather this week.
Have a great week :)

Hi Kerryanne,
So nice to have you come by and thanks for your sweet comments as well.
Thanks for always hosting Create, bake, grow and gather each week.
It's a blessing to many.
You have a great week as well hon,
Blessings, Nellie