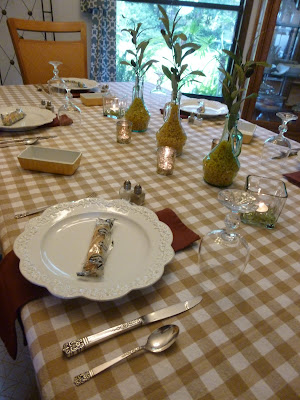 The week has been good so far. but
have to say the headlines are more
than frustrating at times, and I am
sure you know what I mean.

Thought I would finally share
our Father's Day Table today
just for something different and
while I have the time.  lol

Since I was making Italian food
I decided to go with an Italian
themed table. 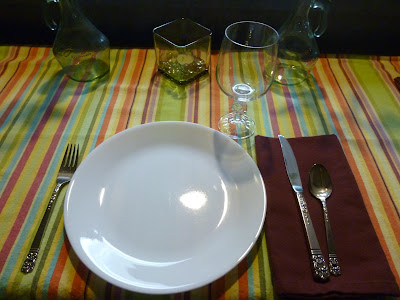 I started off thinking this might work
but wasn't sure if I really liked it and
if it really looked Italian. 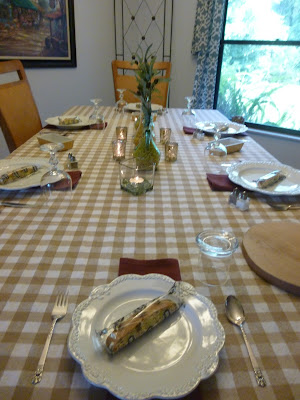 Then I looked online to try and find
some Italian style tables, but found
very few that were actually from
Italy and the few I did find had red
checked tablecloths,  so decided
since I had a gold checked one
that would look sort of guyish
and Tuscan at the same time. 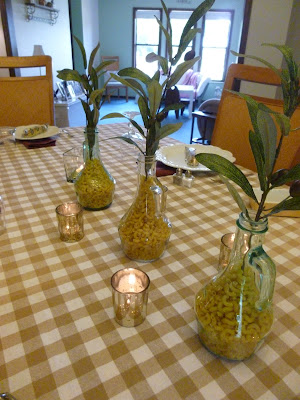 I had 3 of these bottles (they originally
had Olive Garden Italian Dressing in
them), and when I think of Olive Garden
Restaurant, I think of Olives, as they
have olive plants as decorations, so
thought if I could put some olive
branches in the bottles that would be
cute, and the start of my centerpiece.
So actually found one olive branch
at Michaels.....and fortunately it was
enough. 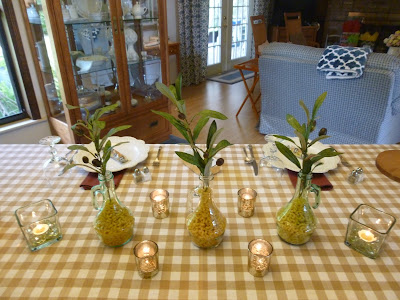 So I stuck the olive branches in but
it just needed something else so I
thought about Pasta, so added macaroni
to each bottle and that was the missing
element..... Then added some glass
and mercury glass candles.  Later
you will see where I added some
colored stones to it as well. 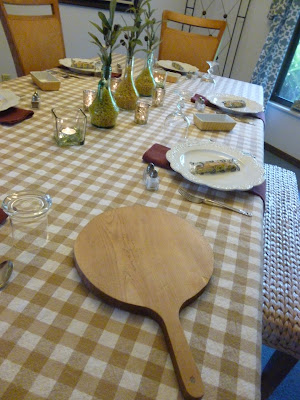 Decided to use my Shabby Chic
dinnerware cause thought the color
looked better but also could look
a lil more antique/ornamental
that could be Italian looking.
Cause I actually saw some
Italian dishware that looked
similar but they were off white
not as cream colored as mine. 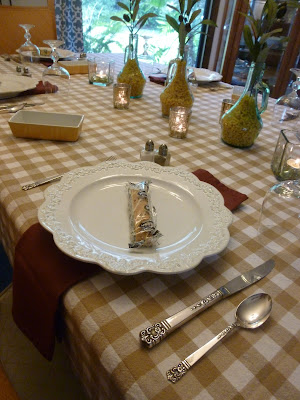 Added my reddish brown napkins
and my Wedding silverware which
could possibly look Italian.
I missed it on the silverware tho,
I just looked for the fun of it, and
most of theirs is very simple and
plain or colored. I actually have
a very plain pattern that I could
have used if I had known. Oh well
Will know for next time. lol 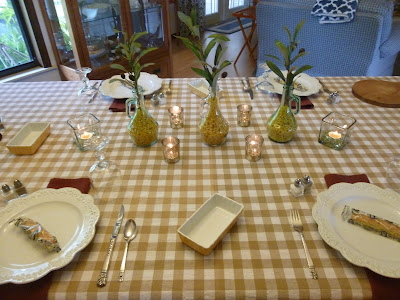 Used clear goblets to match the
bottles and candles. 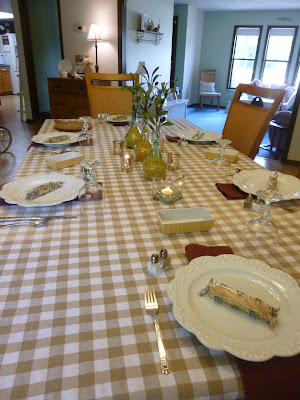 From the opposite end of the table.
The yellow flat dishes were for what
some people call "Italian butter" that
is herbs and olive oil for
bread dipping. 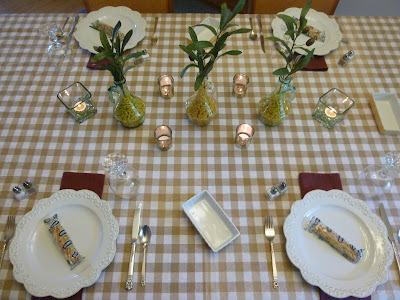 I typically like to add candy to my place
settings,  but couldn't think of an Italian
candy, but did think about Biscotti,  so
put a Lemon Pistachio Biscotti at each
place.  They were very good, but were
a limited edition, so hubby wanted
more but they didn't have them! 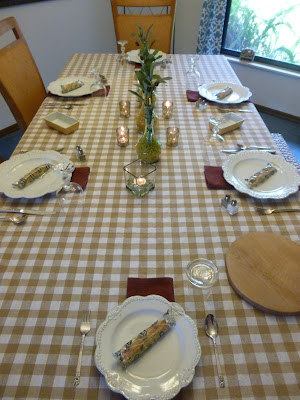 I was gonna use the bread board on
the side for a round loaf of bread,
but decided it would probably make
a crumbly mess, so decided to go
with a bread basket instead. 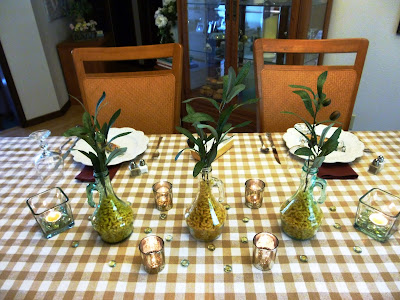 This picture has an equalized affect.
You can see the stones I dotted in the
centerpiece in this and the next picture.
Had forgotten about them and
remembered after I had taken the
pictures, so that's why just 2 pics.  lol
The same stones were in the clear
candleholders. 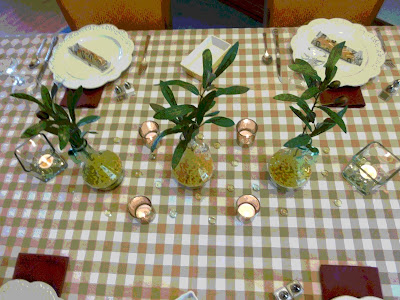 It was a simple and easy centerpiece,
just like our guys emotionally......
Definitely not mentally....lol

We also had a simple menu,

Next week,  I am gonna try and post
my Lasagna recipe, as I want to get
it in my archives anyway.  It a very
easy but yummy recipe.  Just made
another pan to take to a friend.


Well, Thanks for coming by

have a lovely week.

Between Naps on the Porch

Love the bamboo stalks with the pasta so cute and different. Your tablecloth is great too. What is it about checks that always grab us! Happy Wednesday.
Hugs,
Kris

Love your table and the menu sounds great - I want to know what the banana pudding is though? :)

Hello Sharon,
Nice to meet you here in blogland. Thanks for coming by and for your kind comment.
Banana pudding is a dessert that has been around longer than me I would suspect, and I am
68 yrs. old. It is vanilla wafers (a round plain vanilla tasting cookie) that you layer a
baking dish with, then you put sliced fresh bananas on top of each cookie, then you make
vanilla or sometimes I used banana cream pudding mix and carefully pour it over all the cookies and bananas in the baking dish, then put it in the fridge and let it set while,
and when ready to serve you can put whip cream on top. It is usually 2 layers of coookies
and bananas, and 2 boxes of pudding mix (you have to follow the directions on the pudding
mix to make it) Very easy, but a real crowd pleaser.....I loved it as a kid and I love it
still to this day, as well as everyone in the family.
I use Keebler vanilla wafers, and Jello pudding, some people use really ripe bananas but I use ones that are just ripening myself

Hope you get to try it.....if you have any other questions let me know.
Blessings, Nellie