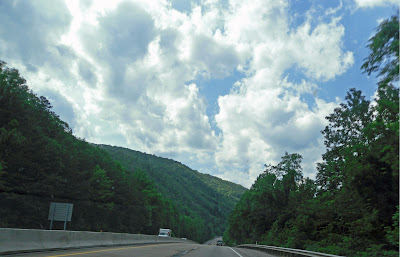 How in the world are you??  It was so good to hear from
some of you.  Have missed you....... but it is good to unplug
for a bit sometimes.

Well, hubby was not only off from work, we went on a 10 day
vacation. So..... see if you can get any ideas where we went
from the next 2 pictures. It is in the Southeast,  and as you can
probably tell  it isn't in Florida!!  lol 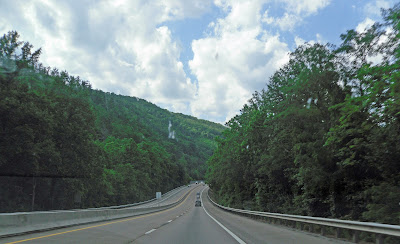 These were taken in the car while in route. 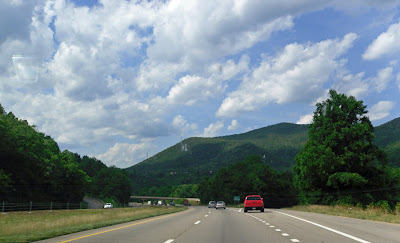 It was to Pigeon Forge, Tenn.~~We rented a cottage or cabin,
I tend to say cottage cause when I think of a cabin I think of a
log cabin,  and it wasn't that!  Anyway, It was a lovely cottage
right on the pigeon Forge River, course, it looks more like a
creek,  but the babbling and music of the water was
indeed a wonderful treat!! 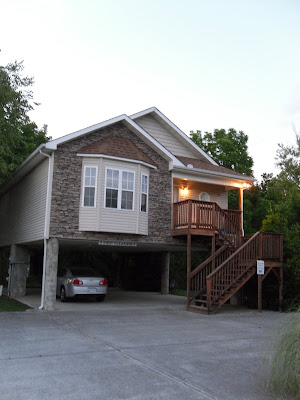 This was our cottage, and they had it decorated
so perfectly for a cabin in the smokey mountains.
I should have taken more pics but I didn't because
altho I brought the camera,  I forgot to bring the
charger,  so when I realized that... I wanted to save
up to take pics in the moutains.  But I will show you
some that I took, and you can go here , (but be sure
to read the rest of this paragraph first) then scroll
down towards the bottom till you see the River Bear,
River pointe 557 cabin,  then click on it and it will
show you all the pics of the cabin,  plus you can
see all the others they have for rent as well just in
case you or someone you know might be interested.


It really was a delightful stay,  and we spent quite a
bit of time at the cottage as we were really not all that
into the tourist trappings, but if anyone wanted to be...
there is plenty of things to see and do there.
The cabin also has a jacuzzi tub on the porch and a big
jacuzzi bathtub,  and cable TV (we don't have any of
these at home) so we enjoyed all these immenities, but
our favorite was sitting out on the back porch having
coffee and listening to the sounds of the river and all
the singing birds, and frog or katydid noises, along
with reading, eating breakfast or lunch out there, and we
even got some sun as well, and that was an unexpected
surprise.  We also saw some sweet wildlife. 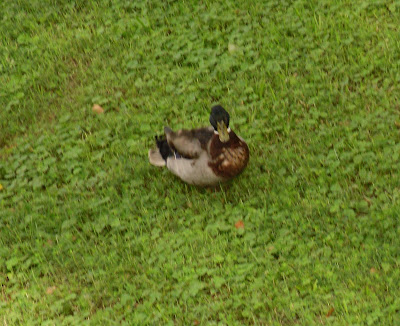 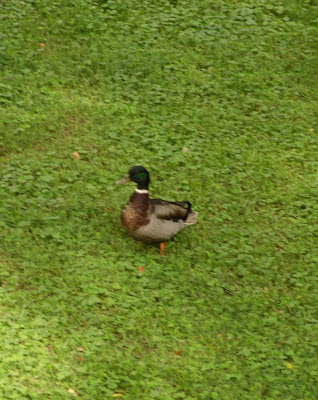 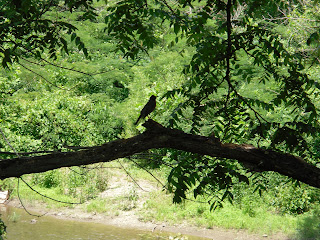 Loved this shot.  It is a Robin Redbreast. There are
tons of them,  and they have a lovely song. 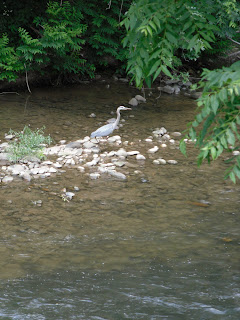 some sort of crane.  they fly up and down
the river and are all bluish gray underneath
their wings.  Very pretty. 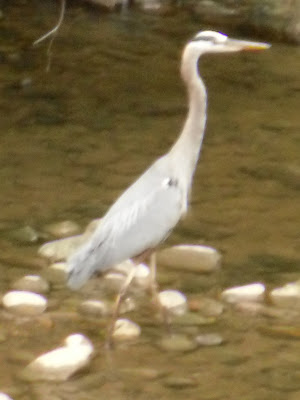 The zoom came out fairly well for a change,
but seems a little washed out cause they are
much prettier than this looks.

and there were fish, turtles, bluebirds, cardinals,
blackbirds, doves, dragon flys (one actually lit on
me 4 times in the same day.....the day before we
rescued one out of a spider web and we were
wondering per chance,  if it was the same one,
and he thought we were friendly folk!  lol
and my all time favorite lightning bugs,  a sweet
reminder of my childhood, haven't seen any in
such a long time and defintitely not as many as
they had.  The woods look like a disney light
parade almost.........very cool..............
Oh Yea, and I forgot we saw a skunk and
5 black bears (they were in captivity) and we
got to feed them.  I could have watched them
all day they were so neat.
We just love all those simple lil pleasures!!

I think we were the only place along most of the river
that had some rapids, small tho they were,  but at least it
made it possible to hear the water,  not so in other spots.

The neighborhood was so well kept and just beautiful
clean and neat.  It is in a valley and only 4 minutes to
the parkway which is the hub of all the tourist activiies
and restaurants.  So the location was perfect,  seemed
like you were in the country yet the city was right there.
We took a number of walks around the neighborhood as
the weather was perfect the entire time we were there,
so really enjoy our walks, as the evening were pretty
cool, in the upper 50 and 60's and it didn't get dar until
9:00 P.M.  One of our friends is from Tenn., but they
were in Florida while we were up there, but talked to
her and she said we were having unseasonably good
weather for this time of year.  The daytime temps were
75-77 most of the week,  and the day before we left it
was 82 I think. Which is still great compared to Florida. 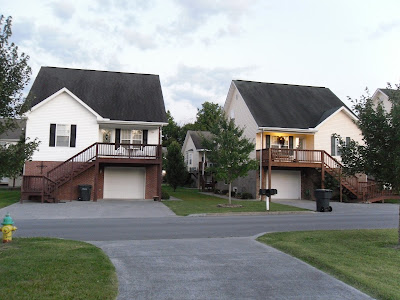 The whole neighborhood is full of these lil cabins.  Some people
live there all the time,  but I would say more than half are rentals.
I am sure they have owners who vacation there and rent them
out most of the time.  As you can see some actually have enclosed
downstairs areas,  but a lot have the open downstairs like ours did,
think it would be hard to live in one without it being enclosed,
cause not enough storage space.

Well, gonna stop there for today,  cause it is already pretty long.

Thanks so much for coming by and sharing life with me.

Always a joy to hear from you.

We've enjoyed several vacations in a cottage in that general area. The one we rent is a little more secluded and backs up to the river... Husband golfs at a few clubs around the area; I check out thrift stores or read, etc. (Just writing it makes me want to go!)

Glad you had a good vacation. Welcome back.

I'm so glad to hear you got to go to your cottage. It's nice to change things up a bit and get out of the usual routine. Looks very peaceful so I'm sure you are feeling great and rested now. We tend to do way too much on our vacations and I'm so exhausted by the time we get home. It takes me a week to rest. LOL! Love the pictures.
hugs
Caroline

An Oasis in the Desert said...

Oh Nellie, what a beautiful place! I went to the website and got lost in looking at all the pretty cabins. Would love to visit and stay in one!!! Glad you had a relaxing time away! Enjoy your day!

What a "cabin!" I didn't realize they were nice little homes! I'm glad to see there were neighbors near also! I love the pictures of the birds! Tha mallard duck was really pretty! I'm so glad you had such a peaceful place!
Love to you, Susan

Hugs and Blessings, Nellie Sharing with: A Stroll thru Life Between Naps on the Porch 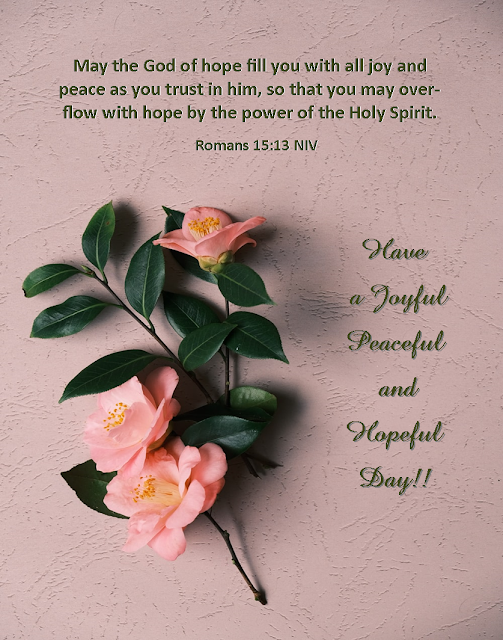 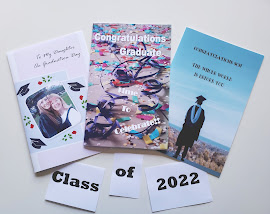