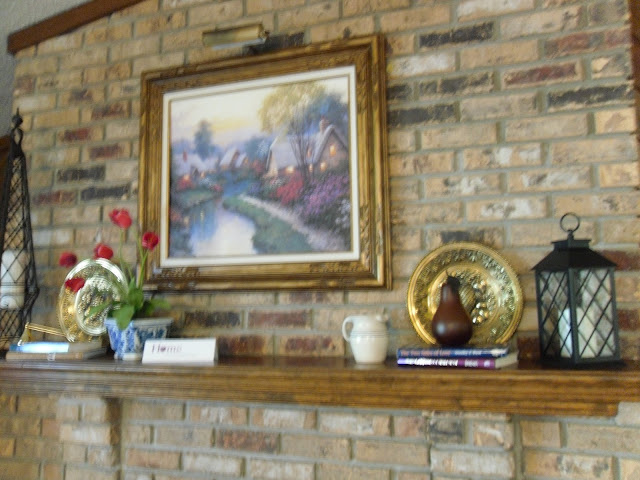 How is your week going so far??
Well, I hope!

Mine has been good,  uneventful for the most part,
but sometimes uneventful is very good!!  lol
We are having very warm temps in the 80's again.
Keep trying to go out and sit in the sun, but we have
so much cloud cover that just about the time I get
out there, the sun goes in............our lovely blue
skies look like cotton ball heaven!!  lol
Can't believe we are almost out of January, and
wondering if we are gonna get anymore cold weather.
Bet if I decorated for spring..... early, we would!  lol
That is what has happened in the past, so I quite
doing it early........

oh, did I say it had been uneventful and that un-
eventful was sometimes very good.....I was right,
cause now it is eventful..........Get This!!

Hubby is nearing that golden age of Social
Security and even tho he isn't retiring yet you still
have to do the paperwork,  well, most people do
theirs online, and he tried but it flagged him cause
he was born out of the country,  as his dad was in
the Navy and stationed out of the country.  So he
had to go to the Social Security office today to
take his birth certificate,  and they said, it was
unacceptable,  it is what he has used his whole
life to get passports and drivers liscense and
whatever else you need it for................he also
took his passport, no, can't take that because
it has expired, well even tho, it is expired he
had to be a citizen to get it in the first place,
Duhhhhhhhhhhh!!
Now my hubby served 4 years during the Viet
Nam era in the Air Force, he also had a secret
clearance with the military and again not too
many years ago for a job where he worked.
Needless to say that he has been paying into
social security all these 40 some odd years.,
and I haven't even gotten to the best part yet,
since he lost his social security card they
had him feel out paperwork to get it , and
when they went to do it they said they couldn't
give him one, because he is not classified
as a U.S. Citizen!   We are in disbelief!!

Nevertheless, we are not going to panick
over this yet, anyway! cause a rep. from the Social
Security office is suppose to call him or he them, if
they don't call in a few days.  So guess we will see
what they have to say and what they suggest......
Our next step, if need be, will be our congressman!

My hubby asked him facetiously, so are they gonna
continue to take money out of my pay check for
S.S. then, and the guy said I know, this doesn't
make any sense,  your are right,  it makes
absolutely no sense..........for heavens sake all
you have to do is check his social security #
against his pay records for all the places he
worked, and how in the world does one get
a secret  security clearance without being
a U.S. citizen, cause they really check you
out good....................
anyway, we would happily accept any prayer
you send our way.  Will keep you posted!!
This turned out to be way longer than it
was suppose to,  but just had to share our
lil saga over here.  lol 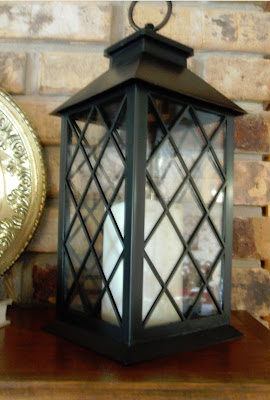 This was a new find from Ross some weeks back,
and a great deal as well.  It has one of those
fake candles that lights up, but we love how it
looks all lit up on the mantle. 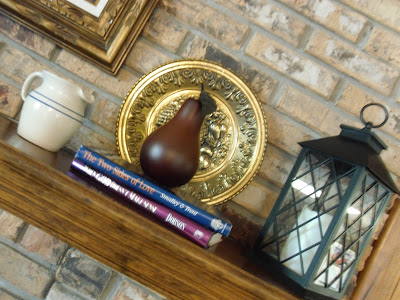 This is the right side of the mantle. I love brass
and I have had these brass fruit plates for over
42 years,  they were a wedding present, and I
still love them as much as the day I got them.
Added some books and a cream pitcher and
a wooden pear and that finished it off........... 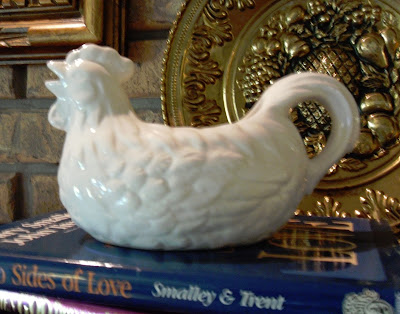 Until,  I found this at Sears for $6.00, so since I was
returning something from Christmas that didn't fit
right, she was one of my replacements. 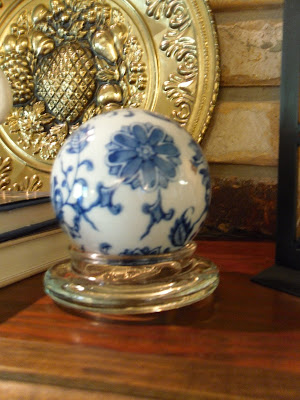 and the same day I found this lil Blue and White
porcelain ball for $1.69 at the Christmas store.
Isn't it pretty!  Imagine a whole bowl full of those. 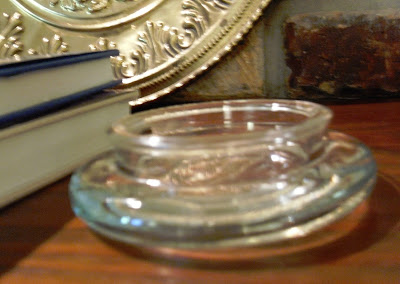 I used a candle jar lid as a holder. 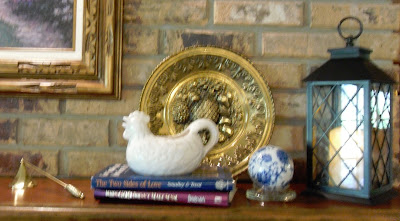 Here is the whole new vignette on the right side! 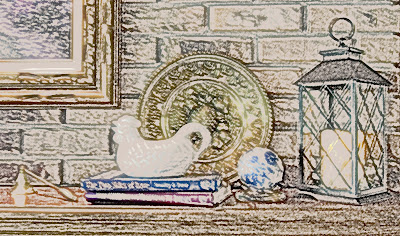 Here it is in colored pencil!

Never thought about how nice this would look with
our new lantern, since it has the same design. 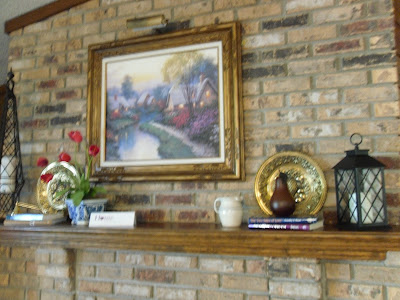 Here is an overview.  Our ceiling vault in this room,  so the
fireplace also vaults upward as well,  so that is why I have
this taller piece on the opposite side.  It balances the
mantle very well. 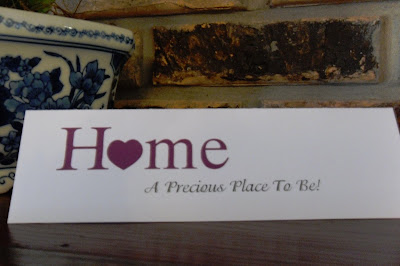 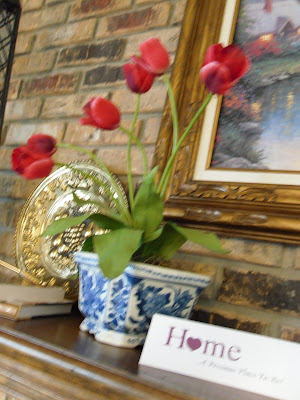 This is the left side again...............love this planter
with the tulips,  my son sent it to me years ago
when he was in college for my birthday and it
had real red tulips in it, so decided to carry on
the memory with some faux  red tulips.  It also
helps hide the cord from the picture lamp. 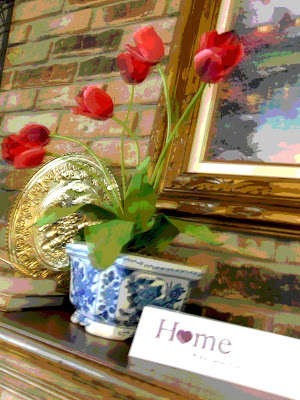 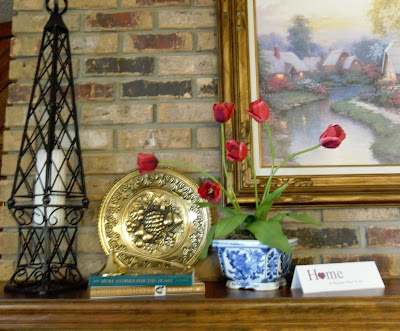 The whole left side,  which I decided to change
again, once I did the other side. 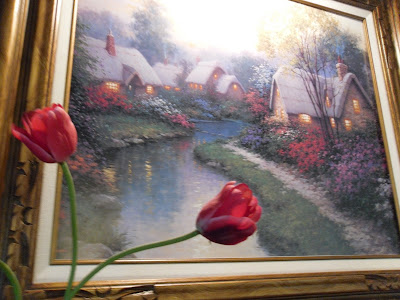 Absolutely love this picture,  and the pic of the pic......lol
I have told hubby  for years this setting is what my home
in Heaven is gonna be like............lol

And.... No,  it isn't a Thomas Kincaide,  only a Thomas
Kincaide look alike poster, I had it foam cored, and then
I put in a really nice frame that used to house an oil
painting. which already had an art light on it. 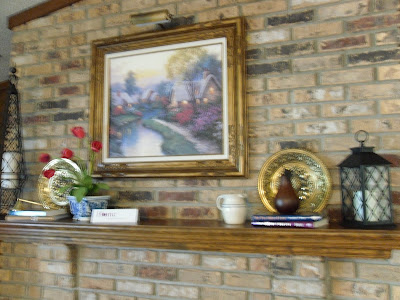 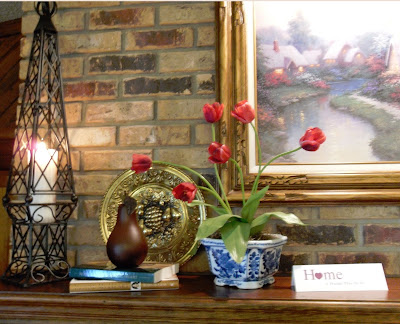 Here is the new changes to the left side.  Really it was
I just added the wooden pear of there and lit the candles. 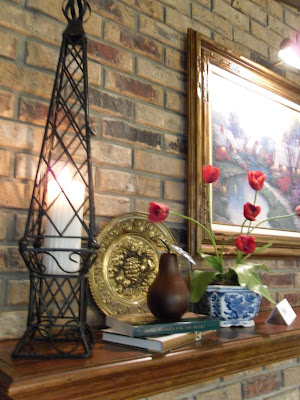 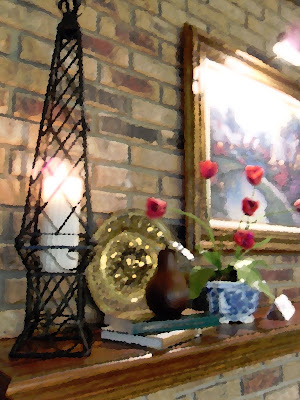 
Well, there you have it folks,
the centerpiece of our family room.

Thanks for stopping by,

am linking up with the style
sisters so come check it out.
Just click Here!

Also linking up to Marty over at
a walk thru life. come on over
and see more fun tabletops.
Just click here!

Have a Sweet Day!

I like that, "cottonball heaven!" I had never thought of that when I look at the clouds!

There should be a military birth record of those born in the "overseas" military hospitals!

I like your white hen. It is really pretty.

The flowers on their long stems are pretty with how they lean in different directions.

Your flowers made a 3-D picture!

My goodness, that is terrible what you are going through with social Security. it doesn't make sense at all.
Your heavenly home picture is so pretty and I would like it as well. Looks like a peaceful place.
Love your new template. i just changes my again too since I did not really like the other one.

I am home today with a sore throat and can't talk. I don't feel that bad but I have a little fever.

Praying for you and your hubby!
Blessings & Love
Janet

Beautiful vignette and I love the touch of brass. Thanks for joining TTT. Hugs, marty

Nellie,
Hang in there, dear one!!!
This "coming of age" isn't forwhimps!!!
In the meantime...I'll be praying that all turns out in your favor!!!
Love your mantle! The photo you transformed is elegantly done!!!If that's where you'll be residing in Heaven, reserve the one next door for me!
Fondly,
Pat

Nellie's Cozy place
Florida, United States
Greetings and glad you came to visit at Nellie's Cozy Place. I am a wife to my sweet husband of 48+years.and Mother to 2 grown married children, a son and daughter, in that order, a daughter and son in love, and a beautiful lil grand-daughter who just turned 6 yrs. a few months ago, and 2 furry grand-daughter dogs, named Rosie (who is in doggie heaven since last Fall) and Lola and we have a new furry grandson Dog named Bentley. I love the Lord and my family so very much. They are all truly a joy to my life. I grew up in Florida, and I enjoy creating a loving and beautiful home environment, setting pretty tables, making greeting cards on the computer, reading christian books,having family and friends over, working in the yard, watching clean inspirational and romantic comedy type movies, playing wii table tennis,being a greeter at my church, and now being a real Grammy. My blogging adventure started on May 4th,09, and has really been a blessing. So happy that you could stop by for a visit.

Contact me by clicking on the email address below:


If that doesn't work, go to your email account and type in the above email address.