Chicken Casserole - My remake of an old recipe - 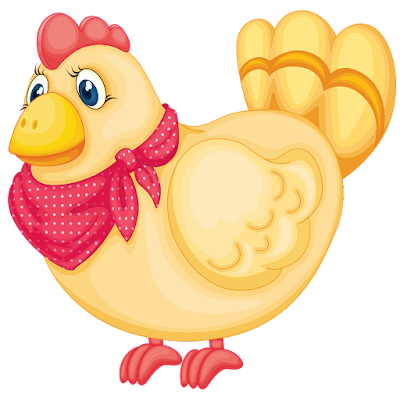 Ours was quite busy for a change,
had a young couple we are working
with over on Friday evening,  had a
baby shower for another girl in our
class early Sat. afternoon,  and then
our lil darling arrived about 4 pm.
for  a sleepover.  It was all great fun.....
but by Sunday afternoon I was totally
exhausted and I am sure the heat index
was a big help in that too.  So I took a
good long nap......and was glad I had
nothing I had to do on Monday!!  lol

Was on the phone with our daughter
Dee for a long time yesterday,  as
she was telling me about their trip to
Charleston, S.C. over the weekend.
It is looking very likely that they
may be moving there in the next
few months. It is about 10 degrees
hotter there,  which she is not
thrilled about, since the weather is
so great in Asheville, but the have 5
beaches, which she is thrilled about!!
so will know sometime soon how it
is gonna play out!
One nice thing we love about it....
is it will only be a 51/2 hr. drive
rather than a 91/2 hr drive,
So can't help but love that!

Thought I would share this great
Chicken casserole with you....I
used to make this all the time when
the kids were growing up and I
seriously have no idea where I got
this recipe,  but stopped making it
about 10 or so years ago after hubby
had his heart surgery as I used to
use stove top stuffing in it, but un-
fortunately they put hydrogenated
oils in their stuffing, and that is a
huge No No for heart patients.
So happened to think about it one
day while I was in the grocery
store and just thinking about how
good it was made me think I can
probably make my own cornbread
dressing and redo the recipe, so
that is what I am sharing with you
in the recipe below.  So hope you
give it a try.....it is definitely a kid
friendly recipe.........most kids I
have tried it on love it........as well
as the big kids!!  lol

2 eggs
(I used eggbeaters in the equivalent
of 2 eggs)

Salt and Pepper to taste

First you start with this Krusteaz
Southern cornbread mix, or of
course, you can make your own
cornbread, if you buy some corn
meal there is probably a recipe
on the box, but I thought of this
old recipe while I was at the store
and in high heels and my feet
were hurting, so this was
closer..........lol

I made the cornbread the day before.
Just follow instructions on the box.
and if you are making it the same
day, just cool it first. 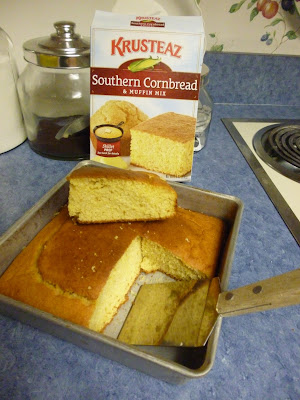 Then you cut the cornbread in fairly big
pieces, and I just rolled it between my
hands to crumble it all up.  Make sure
to wash your hand first....
Don't want anyone to think we are
unhygenic here...........lol 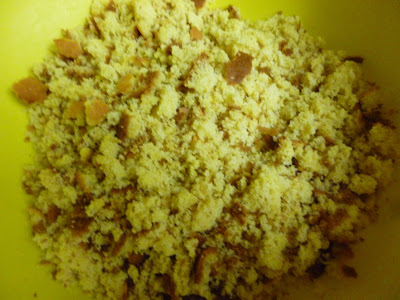 You will need 4 cups of cornbread crumbles 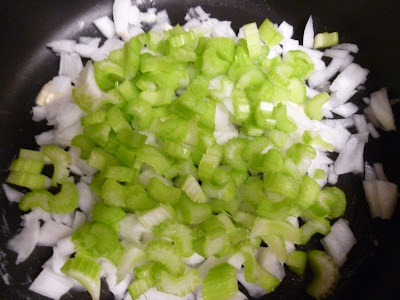 Now chop your onions and celery,
then in a large skillet over medium heat,
melt the butter and saute the onions and
celery until soft. 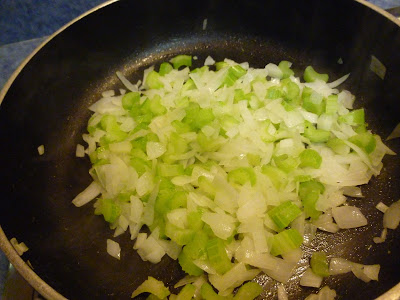 They should look like this,  try a pc. of
celery to make sure it is sof enough before
you finish sauteing. 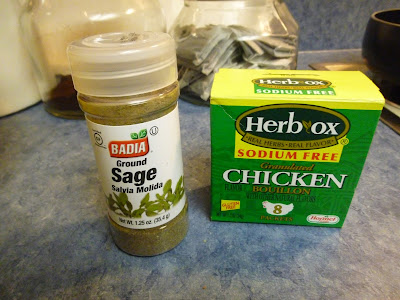 Now in a large bowl,  add  the 4 cups of
crumbled cornbread, the sauteed onions
and celery, eggs, Chicken bouillion, sage
and salt and pepper to taste,  mix well. 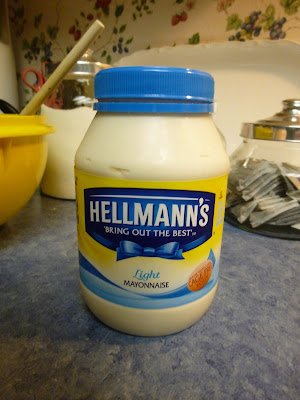 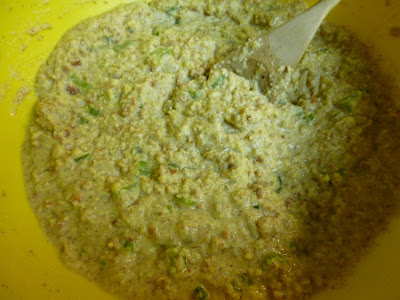 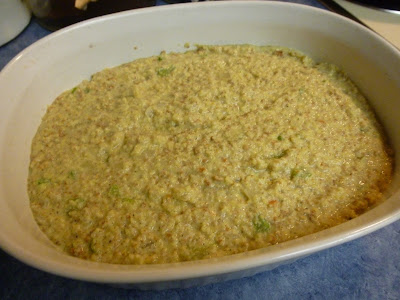 Put it in your prepared baking dish. 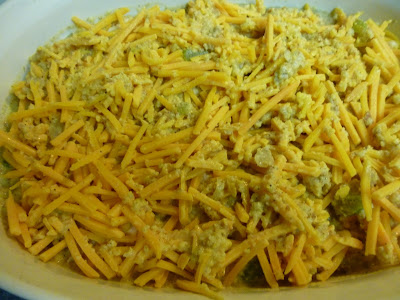 Then add the cheese on top, and bake
at 350 degrees for 30 minutes.

This pic above was taken after I added the
chicken and had put the cheese back on so
the stuffing was mixed with the cheese
some. lol but it tasted fine,  and once the
cheese all melted you could never tell..... 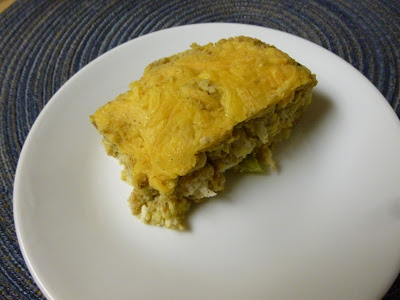 I also forgot to take a picture of the
finished product,  but did have a small
piece left in the fridge so took a shot
of that, so you get the idea.

We both really enjoyed it!

It really isn't as hard as it sounds!!
and if you want... you can  always
use  cornbread flavor stovetop
stuffing........

Hope you give it a try......you won't be
sorry, especially if you like cornbread
dressing!  lol

Glad you could stop by for a few
minutes out of your day.

Have a fabulous Day!

Art and Sand with Carol and Friends

Walking on Sunshine with Lois and Friends

Designthusiasm with Lory and Friends


Life and Linda with Linda and Friends

Stone Gable with Yvonne and Friends
\
The Dedicated House with Kathyrn

Sounds like a yummy casserole. I mean, cornbread and chicken, how can you go wrong?

Yes, Asheville is a pretty perfect place climate-wise, but I do love that they might be moving closer. That will make long weekend visits much more doable.

Think we will all be sorry to see them leave Asheville as we have really
enjoyed visiting there as well and you are so right about the climate, it
is fantastic..........

and yes, we are beyond happy about the new time frame cause as you
said it will definitely make long weekends doable where they weren't before
for us anyway, Scott and Megan do a 4 day trip every so often........

Thanks for much for dropping by and for all your warm sweet comments.

Thanks for linking up to Trip to the Past Tuesday!!

Hi Patti,
Your welcome, thanks for allowing me to join your party.
and thanks for hosting.

That really DOES sound good. I think I'll copy it and try it for a meal I'm to deliver later this month to a couple from our Sunday School class who are convalescing!

Hi Rebecca,
It is a great casserole to take to a pot luck dinner or for someone who has been in the
hospital. I have made it many times for that....and they will love it. It also reheats very
well for leftovers.
Glad to hear you are gonna try it.

Praying for you and your family,
Love and Blessings, Nellie

Hi Susan,
I know you hate mayo but it is only 1/3 cup of Hellmans, and you can't even taste it, Ithink it is just for the purpose of making it more moist, and if you liked Mom's cornbread dressing you will like it, cause Jimmy and I both thought that is what it tasted like, but just that it had chicken and cheese added.

Hi, Nellie.
I know it tastes just as good with mayo, ha, because I have eaten yours before with the mayo! There's something about cooked mayo as opposed to it being a spread on bread. I love your cooking! You have done such an excellent job of cooking for you and Jim's health! Praise the LORD for your love!! I love you all, Susan

This sounds so comforting and delicious. It's the perfect moving-into-fall dish, and I am more than ready to start cooking for cooler weather. Thanks for sharing.

Morning Pattie,
Nice to hear from you hon, and thanks so much for stopping by and for your lovely comments.
Guess I never thought of it as a Fallish dish cause I used to make it year round, but really
after what you said, I really think it would be a perfect Fall dish........
Yea, a change of seasons usually brings about new dishes to prepare, at least at our house,
and sounds like at yours too...........

HOpe this finds you doing well hon,
Have a great weekend,
Blessings, Nellie

Hi Susan,
You have only had the old type I made, the new one tastes a bit different but better, we think. But hey, to each his own............lol No offense taken.

Thanks for your encouraging words, they are appreciated.

Have a good day and weekend hon,
Blessings, Nellie