Happy 39th Anniversary and Our story 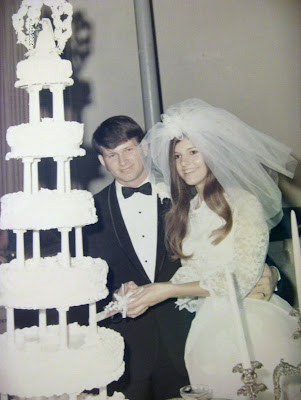 Even though this is a few days late,  3 exactly,  I still

want to pay a tribute to my Wonderful Hubby of 39 years!

So excuse me for just a minute,  and then I will tell you

Our Story of how we met.

Your are the Best,  and I appreciate

and Love you so very much,

and could never imagine what my

With that said,  I have to tell you we had a very

lovely and fun weekend, truly a delight for us.

We had plans to go do some shopping at some

Malls we only frequent once a year,  but due

to the shooting in Orlando on Friday and the

traffic,  we decided to stay nearer home, but

we still had a great time Christmas Shopping

and going out to dinner,  then on Saturday

Scott and his new girlfriend, Megan and our

over for a Lasagna feast.  Then we played

you drawing cards,  it shoots them out to

you and in the number the machine chooses.

This game is garanteed to give you some laughs

for sure!  Then of course,  on Sunday there was

church and on Monday,  we just enjoyed lounging

around reading to one another and hanging out and

relaxing.  It was just fun being together, with

no agenda and nothing we had to do!

We also took our first showers in our newly

renovated bathroom.  What a delight!

Can't believe how much bigger the shower

seems,  because of the lighter and larger tile.

I love it everytime I use it,  feel like I am

at the Ritz Carlton or something ! lol

And I can thank my Sweet, hardworking,

"make it look just right" hubby. He did

such an excellent job,  and I helped too,

so he gave me a pat on the back too! lol

Well,  I better get on with the Our Story

guy who just got out of the Air Force,  and came

back home to his family in Key West, Florida.

Jimmy (as the family calls him) used to be best

friends with  my step brother-in-law, David,

and happened to run into him at Burger King,

and they talked a bit,  and David said,  hey,

My sister-in-law just broke up with her boy

friend,  maybe I can set you up,  so Jim said

My  Step -Sister Kathy calls and tells me the

scoop and I am a little nervous because

David had tried to set me up before and I

I told Kathy I would only go with they

would go too.  So she said of Course, so

this all took place on a Friday and my

Dad was very strict,  and my step Mom

could not get a hold of him,  so she told us

to go to the movie and come right back.

So they come to get me,  and my sister

comes up,  and says he is really cute,

and we are both relieved.  While he was

haired sister-in-law who was living with

us while my step brother was in Thailand

went down to leave and when she walked

thru the living room,  he thought that  she

was his date,  and then quickly found out

Shortly after Kathy and I came down,

and  I was introduced to my blind date,

and off we went.

He was feeling a bit better by then, I think!  lol

We went to see "Butch Cassidy and the

Sundance Kid",  and we came right back after

the movie just as my step Mom had asked.

He had opened doors and car doors,

and  I thought he was very polite and nice,

much much nicer than most guys I had  dated.

I also thought that there was something very

different about him, but I didn't know what,

and I liked him a lot right off.

Almost a week went by and I had heard

nothing from him,  and my sister asked

had I heard from him and I said No,

a guy this much,  I think you are gonna

marry this one.  I said I doubt that!

I can't even get him to call me.

But he showed up at their house that evening

and she asked him why hadn't he called me,

and he said well,  I didn't really think she

you should give her a call.

got home,  and asked me out for the next

night,  and I didn't want to seem to eager,

so I said I already had plans, so he asked

me if I had plans for Saturday night and

to the movies again,  and he asked me if

I would like to go to church with him in

the morning and come over for Sunday

dinner and meet his family.

Well,  I was very impressed with that,

So the next day we went to church

and his Pastor introduced me by mistake

as his fiancee,  and we were both a lil

embarassed and didn't know what to say.

We think now he was a prophet!!  lol

He also married us as well.

It was a very small Church,  and the

Sunday School was in the choir loft,

and when we sat on one of the benches

it fell and we wound up on the floor.

Nothing short of an embarassing day!

But it was all so darn funny too!

I had met his parents at church,

and then we went over to their home

afterwards for dinner,  and spent

most of the day.  I loved his family

right away,  and they were very

loving and sweet to me

From that day forward I don't think

we missed a day of seeing each other

and by the end of May we we were starting

to talk of engagement.  I was getting ready

to graduate but I said I didn't want a ring

for graduation,  I wanted our engagement to

be a whole separate occasion.

At my Graduation party he gave

me a gift in a tiny box,  that was inside a

lil bank,  and when I opened the bank

just knew it was gonna be a ring,

me included,  but when I opened it,

it was a charm for my bracelet he

had bought me for my birthday

I think everybody was a lil

disappointed, in a way,  secretly,

so was I... just because it would have been

such a surprise.  But he had honored

my wishes,  and I was glad of that too!

On August 18th,  I officially got my

ring and loved it!  Course,  I helped

pick it out!  lol

Pretty soon after our engagement, we began

to make Wedding plans,  and were finally

We resided in Key West for just over a year,

then moved to Hialeah, Florida for 3 weeks,

then to Bitburg, Germany for 10 months,

then back to KeyWest for 2 weeks, then

then to Homestead, Florida for 5 months,

then to Fort Lauderdale, Florida for about

7  years or so,  and have residing in the

From the time we left Hialeah to Fort Lauderdale

hubby did govt. contracting that is why we moved

so much.  It was a fun and exciting time tho.

We settled down  once we got to Ft. Lauderdale

and bought our first home and had our son

we moved to Central florida. 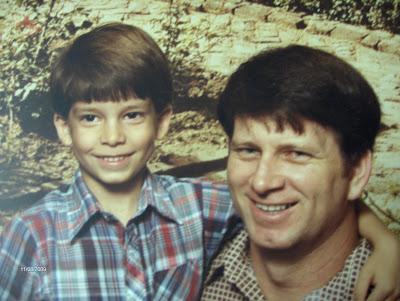 We had Scott for our 7th Anniversary,  and 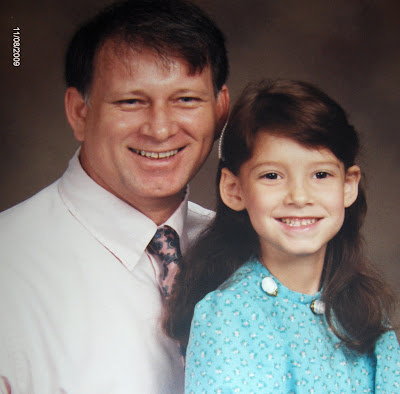 Dee is about 5-6 here as well,  which would make Jimmy 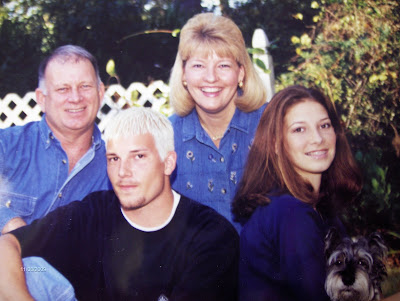 We had our own photo shoot for our 25th Anniversary,

and this was one of the pics.  Could not believe Scott

got his hair bleached just in time for the pics.  lol

These were some of our favorite pics tho.

This was taken Christmas right after our 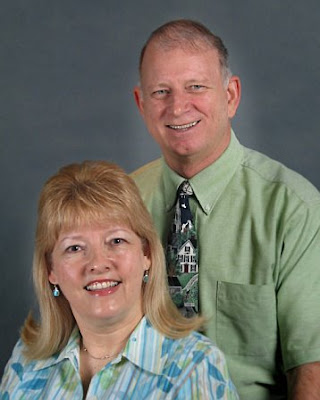 And this was taken around our 35th Anniversary,

so guess it is time for a new one soon!

back he shaved his head,  I really like it now,

but it was a lil shocking at first.

Sorry this is sooooo long but I wanted to have

the story documented somewhere for my kids and

Grand kids,  if we ever have any! lol

Well,  thanks for coming by today,

and for all the nice Anniversary wishes you

sent our way,  they were truly appreciated.

Thanks for all the Great times

what a precious story of God's provision and plan! His Love permeates your marriage and spills over onto all who know you both.
Praise to His Glorious Name!

And that a wedding cake!!! How many layers?
You both look so sweet and so young!
Those were the days...LOL.

wow, 39 years and counting! and married in just 10 months! i love your story. i didn't know your children are 7 years apart. my sister and i are 8 years apart. 6 layers of wedding cake?! you must have had a big group of guests-how sweet! i love your wedding photo :)

Happy Anniversary! When I saw the picture and your cake I thought to myself "wow, those were the days when cakes were REAL" ... have you noticed so many now are just frosted styrofoam? What a wonderful love story. We celebrated 33 this year and I also blogged about our story if you care to look: http://lifebetweenthebuns.blogspot.com/search/label/marriage
May you have many more happy years together!

Happy Anniversary! I really enjoyed reading your love story and seeing the pictures of you and your family! Thanks for sharing it and I'm hoping for grandbabies for you real soon!!!

Happy Anniversary! I love knowing people that have been married forever...they usually are just so special, so refined and unselfish. Our next will be 42 in June. I enjoyed seeing your vintage wedding photo...looks a lot like ours. We didn't know half the 400 at our wedding they were all friends of our parents. We had a very tall cake too..layer upon layer.

Your children are so cute, honestly they look so much like you and Jimmy. Great bleached blond look on Scott. Aren't kids so funny?

It's a beautiful life you have both created. Congrats! Love to you both! Glad that blind date turning into something wonderful!

Oh Nellie! What a fun story!! And what an amazing thing God did when He brought you and Jimmy together! You two are such a great team, and your marriage is a wonderful testimony to today's world!! Thinking back through the years I can only begin to imagine the amount of lives you both have touched through your ministries. You two are truly a dynamic duo!! Batman and Robin have nothing on you!!

May God continue to bless the loving commitment and covenant you made with Him, and give you many more years of happiness together!

OH and that wedding photo is absolutely charming and precious!!

Thank you for 39 wonderful years... They have been precious years filled with time with my best friend and lifelong lover, YOU!!!

Thank you for your loving comments...

It has been and will continue to be the trip of a life-time!!!!

With All My Love
Your Hubby.... 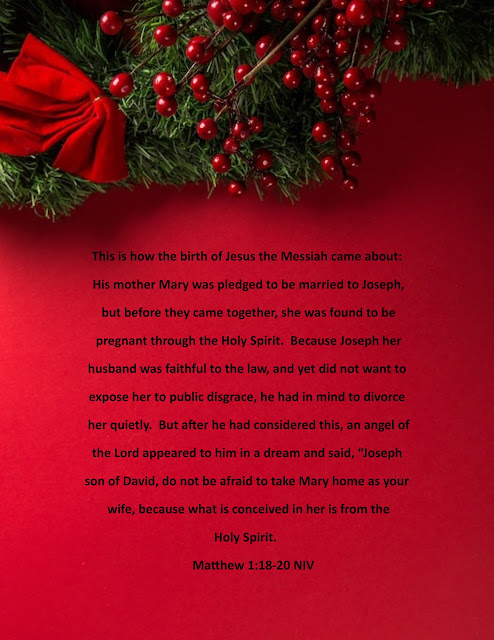 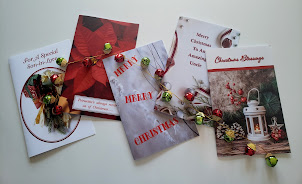