Part 3 of the "Flooded House" 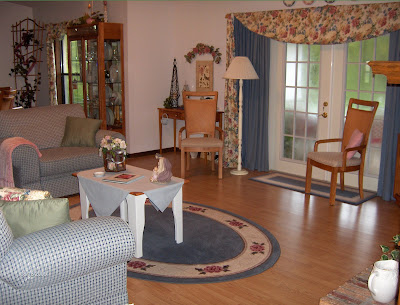 So many heaven sent gifts! Amazing! Happy weekend!
Love, B

Hi Nellie, Love the photo of your living room~if hubby would let me decorate more country I would...yours looks so warm and inviting. Can I come hang out with you and Becky for bible studies????Wish I could.
What a lot you went through with your kitchen..but what a good insurance adjuster.
Thanks for sharing. Have a great weekend. Happy Labor Day.
Hugs, Noreen

Nellie's Cozy place
Florida, United States
Greetings and glad you came to visit at Nellie's Cozy Place. I am a wife to my sweet husband of 48+years.and Mother to 2 grown married children, a son and daughter, in that order, a daughter and son in love, and a beautiful lil grand-daughter who just turned 6 yrs. a few months ago, and 2 furry grand-daughter dogs, named Rosie (who is in doggie heaven since last Fall) and Lola and we have a new furry grandson Dog named Bentley. I love the Lord and my family so very much. They are all truly a joy to my life. I grew up in Florida, and I enjoy creating a loving and beautiful home environment, setting pretty tables, making greeting cards on the computer, reading christian books,having family and friends over, working in the yard, watching clean inspirational and romantic comedy type movies, playing wii table tennis,being a greeter at my church, and now being a real Grammy. My blogging adventure started on May 4th,09, and has really been a blessing. So happy that you could stop by for a visit.

Contact me by clicking on the email address below:


If that doesn't work, go to your email account and type in the above email address.