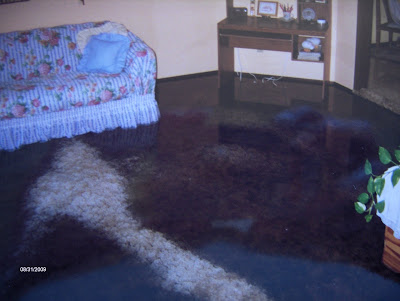 (Another reminder Photo)
*
Good Morning Sweet Friends,
*
Hope you had a great day yesterday,
and are ready to face Tuesday with anticipation.
*
Well,  I am gonna tell another part of the story
today................... I have no idea how many more
parts there is gonna be to this thing,  hopefully,
only a couple more,  but guess we will see!!
*
*
Well,  I left you,  with us now....... having new floors,
and so I am into the next week and the carpeting
people are coming,  it is Oct. 15th, 200l, to be exact.
*
Oh and I have to tell you.  That somewhere just before
I found out they were coming,  I found out more surprising,
but great news.   The lady I had worked with at the carpeting/
flooring store had called to tell me she had been talking with
the Insurance Company,  and they had given them the go ahead
to carpet our bedroom and closet too.  Remember the carpeting
was still in there,  and they dried it out. ( See pic below)
The lady at the carpeting store ( she is a christian)
said because our house was a split plan and since you couldn't
see our bedroom from the other parts of the house
typically Insurance wouldn't recarpet that area,  since they
had  already dried  it out.  She was very excited about it,
and of course,  so was I, and she said,  You know,  this almost
never happens,  and I think it's the Lord,
and I was thinking I absolutely know it's the Lord,
but I knew what she meant,  and  wholeheartedly agreed with her.
* 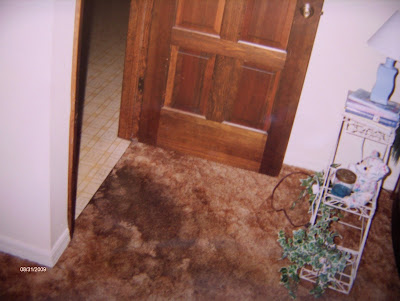 (That carpeting is a lot wetter than it looks,  it is just because
we hadn't walked on the other areas yet)
*
So the fellow arrives to do the carpeting and he is going in and out
bringing in his tools and stuff,  and I keep opening and closing the
door for him,  and I noticed someone else was in his car,  and
he would talk to them when he went out but they didn't seem
to be coming in,  so I asked him if whoever was in the car
wanted to come in,  cause it was hot out there.
*
He said well,  it's my Mom,  and she came to help me move
furniture because my helper didn't show up this morning,
and she can just come in when I need her,  and I said,
absolutely not,  you go get her and tell her to come in,  that is no
problem at all,  it is too hot for her to sit out there in the car.
*
Secretly,  I think he was really hoping I would say that,
cause he seemed relieved and went right out to get her.
It probably didn't seem like the job appropriate thing,
to just bring her on it without asking or something.
*
She  was a lovely woman,  and turned out they were
both believers,  and she and I had a delightful time
having coffee and cookies and chatting when he didn't
need our help,  which was pretty much most of the time.
She was a bit older than me,  and seemed to be discouraged,
but she was so genuine it was like I had known her my whole life.
We had some great conversations about the Lord
throughout the day.
*
When lunchtime came, they had brought their own lunch,
so I made a sandwich and we all had lunch together.
He was probably in his late twenties to early thirties,
I am not a great judge of age for some reason.
*
Anyway,  as we talked over lunch he revealed that
his wife had just divorced him,  and you could tell
he was having a very difficult time with it.
He seemed like a very genuinely nice fellow.
I asked if he was attending church anywhere,  and he
said No,  but I want to go back,  so I was able to tell
them about a sister church of ours that was in
their area,  and to explain that it was a bible based
church,  and they did their preaching and teaching
from the bible,  he seemed very excited to try it.
Never found out if he did or not.
*
As he worked laying carpeting all day,
I had a truly delightful time with his Mom,
and think our time together cheered his Mom up a bit,
it certainly did me,  she was great company!!
and so was he really!
*
He did a fantastic job on the carpeting,  it looked
just wonderful,  and so beautiful and it was so great
to have carpeting again,  instead of concrete with paper
rugs!!  Our house was finally looking like a home again!
Oh The Joy of it all!!
*
Well,  he packed up his tools,  she and I said lets
keep in touch,  I sent her off with my phone number,
and  she gave me hers,  but I never heard from her
again.  I did try to call her,  but never got anything
but an answering machine.  Guess it was just
meant to be a one day friendship.
*
Next week,  they begin to work on the kitchen, at last,
but actually way quicker than we had  expected since
we knew it took 6 weeks just to order the cabinets.
*
Will pick up there next time
*
*
Stay tuned for next Tuesday's,  Part 6
*
Hope You have a truly great day
and Evening!!
*
We are going to an Ordination Service at our
church tonight.  Our Children's Pastor has finished
his schooling, and has gone thru all the steps of the
liscensing and Ordination Committe,  and is going
to be officially Ordained tonight.  We are so excited
for him,  He is a great man of God,  and truly loves
children,  and he is doing a wonderful job with the
children of our church.  They just love him too death!
*
*
That's All Folks,
*
*
See ya tomorrow,  thanks for dropping in,
*
*
Hugs and Blessings,
Nellie
on September 15, 2009

Looks like I had better get my shopvac for that sunken living room!!!!!

have fun at church tonight. what a special evening! what a fun way to spend the day with his mother. i love unexpected days like those.

Hi Nellie, just checking in on the continuing saga. Enjoy your evening!

How special - that you were able to share your faith and an invitation...what a wonderful opportunity! I'm sure you were a blessing.

So glad the repairs are going well!

Just popped in. Enjoyed looking at your fall things. WIll try to catch up on your stories.