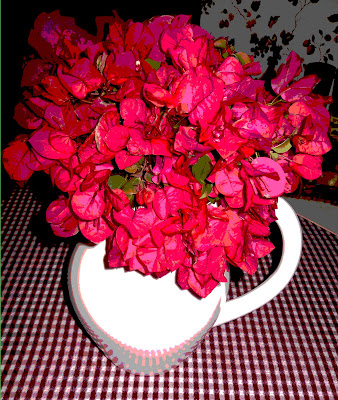 I can tell you we are cold tonight!!

I hear you laughing all the way in Florida,

all you folks who have snow and blizzards.

Take pity on us poor Floridians who have

such thinned out blood, and light clothing,

I know your heart is just dripping with compassion,

Course, it's your fault we think all that snow

and stuff is sooooo much fun,  cause you are

sledding and building snowmen and shoveling

and visiting with neighbors,  and drinking hot chocolate,

what's to complain about right???

Just Kidding,  we appreciate your positive

approach to all that cold white stuff on the ground,

yall are troopers,  cause not one whiner in the

Well, remember just a few days ago I showed

you our winter yard with the bougainvilla

and the powder puff tree,  and said that is

our winter for now,  course, we haven't had

We are going to 29 degrees,

again,  I hear you laughing,  it's not that

We are in for 5 nights of freezing temps,

I think I have died and gone North!! lol

I am really glad I showed you my pics

because today we had to cut off a lot of

our pretty bougainvilla in order to get her

in the garage to protect her.

I was throwing it in the garbage can

when I thought this is too bad,  and I

thought why not take some in the house

and make a nice bouquet,  so I did!

and here it is! 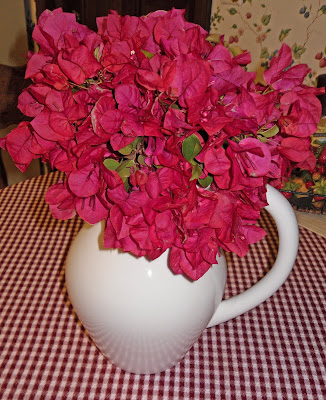 Isn't it beautiful,  so hopefully we will be able to enjoy

it a lil bit longer,  course,  the heat may do it in so

we will see.  Did you notice that my header pic

and this pic look a lil bit alike,  well that is because

the header pic is a photograph just like this with

a posterized effect on it,  neat huh!!

I love those effects that you can use,  they can

make for some really neat pics.

I feel like it has been a century since I have

been blogging,  so this feels sooooooo good!!

Guess I better hush and leave you with some

verses for the day

Now when you see what they are... you are

gonna say to yourself " Hasn't this woman

heard Christmas is over!!"

in fact,  some scholars and bible teachers

think that they could have come to see

the baby Jesus as much as 2 years after

his birth, cause notice they call him a child

my heart to share this portion of the Christmas

story,  so If the Lord says, I gotta do!

So hope you enjoy it!!

After Jesus was born in Bethlehem Judea, during the

time of King Herod, Magi from the east came to

and asked, "where is the one  who has been born

king of the jews?"  We saw his star in the east and

have come to worship him.

when King Herod heard this he was disturbed, and

all Jerusalem with him.

When he called together all the people's chief priests

and teachers of the law, he asked them where the

Christ was to be born.

In Bethlehem in Judea they replied, "for this is what

the prophet has written:

"But you, Bethlehem, in the land of Judah, are by no

means least among the rulers of Judah;

shepherd of my people Israel."

then Herod called the Magi secretly and found

out from them the exact time the star had appeared.

He sent them to Bethlehem and said "Go and make

a careful search for the child.  As  soon as you find

him, report to me, so that I too may go and worship him."

After they had heard the king, they went on their way,

them until it stopped over the place where the child was.

When they say the star, they were overjoyed.

On coming to the house, they saw the child with his

mother Mary and they bowed down and worshipped

him.  Then they opened their treasures and presented

him with gifts of gold and of incense and of myrrh.

And having been warned in a dream not to go back

to Herod, they returned to their country by another

When they had gone, and angel of the Lord appeared

to Joseph in a dream.  "Get up, he said, take the child

and his mother and escape to Egypt.  Stay there until

I tell you,  for Herod is going to search for the child to

Well,  Sweet friends, it seems that right from His

birth our Sweet Lord had someone wanting to

kill him, and many other times throughout his life

as well,  but that never happened before God's

Because God the Father was on His throne,

and God the Father was in Control,

I just want to encourage you that with all the

are happening in our country and world today,

that God is Still on His Throne, and He

Is Still In Control of Everything!

Cling to that thought,  and Cling to Him.

He loves His Children,  and He takes

care of His own.  Our job is to stay

close to Him by reading His word and

praying,  giving thanks,  and being as

obedient as we can possibly be!

May Love, Joy and Peace chase

you down the street!!

Happy New Year Nellie. Happy Sunday too! We're super windy our way since yesterday. And cold! No snow though thankfully. I can't take anymore right now after our blizzard a couple weeks ago. I need a break! Not to mention since Christmas night I've been dealing with some head cold/allergy symptoms. It's driving me crazy. I wish it would clear up and go away soon. I took a 3 hour nap yesterday, woke up around 6pm and went back to bed at midnight and had no problem going right back to sleep. That's saying something because normally a 30 minute nap in the afternoon messes with my sleeping at night, but not yesterday. I hope all the sleep is kicking this stuff out of my system!
Hope you have a great week coming up!

sistersusiesays said...
This comment has been removed by a blog administrator.
January 3, 2010 at 1:29 PM

I think I got my blogs reversed again, ha! I hope your week goes warm for you! It's back to the "grind stone" for me tomorrow (in the cold at that brrrr.) Thanks for your reminder of give thanks in all things for this is the Will of our Father!

Happy New Year Nellie, we are cold here no snow but living in the deep south we aren't used to the temps. we are getting. My furnace has not stopped today. And the weather man is not calling for any relief for us. So just try and keep warm.

Love your new blog look, you did a wonderful job, I have so much fun decorating mine too.
I so enjoyed reading your post,and the scriptures you shared.
Blessings,
Sue

Hi Nellie,
Thanks for coming by, I so enjoyed reading of what took place with your daughters friends and their family, if there is one thing for sure, we never know when or how God is going to use us. I am so glad you were there to speak into their lives.
I live in N.C. and we are soooo cold, my furnace is still running so I turned our gas logs on today hoping to warm the house and maybe the furnace will get a rest. lol
Have a great week Nellie and you stay warm too.
Blessings,
Sue

Hope you are enjoying this first week of the new year! and that you are staying warm! Its just plain cold everywhere!! Every blog I check - every phone call I take today....all the same "Its cold!!" I'm trying my very best not to complain.....

Maybe its time for some hot chocolate:)